Shop talk, answers to your FAQs, and a peek behind the scenes of an artist-run fine art gallery in Park Slope

Creating New Work From the Old

These past few months have been a time of reflection for me.   After graduating from school and decompressing after a grueling, yet rewarding year of thesis- I am left with several uncompleted bodies of work; the results from ideas that didn’t make it to their completion that year.

As I was working towards creating work for The Project Space for this October, I was tempted to shift my focus from the past and to begin creating new work once again, as school trains you to do. But there was something unnatural about this. My mind was in this contemplative state for a reason and as an artist I’ve learned that I should always trust my gut.

I began experimenting with my older pieces, combining ideas and processes. I found that the holes left in one piece could be beautifully filled, and complimented with another. Working with two fragmented past series, I combined them to create one whole series- Fuse.

The two original ideas that spawned this new series were created in very different ways and with different head spaces, but came together in the end. One body of work was created while on an airplane. As an experiment in artistic restriction, I limited myself to the seat of an airplane and the time span of the flight (2 hours), to create work for an upcoming assignment.

The other body of work was created in a 3D modeling class in which I had the freedom to create digital objects from my imagination. I realized that these two series had an interesting dialogue in the way I was using them. Photography versus digital images. Digital images can be seen as so calculated and photography is viewed as much more impulsive, but the roles were being reversed. Together they created a new series, one that questions the relationship between photography and digital imagery and what their roles are.

The title of this month’s Project Space is Codification of Chaos and that theme is definitely present in Fuse. Two series, one restrictive and planned, the other used as an outlet for creative imagination.

Seeing the art hanging on the wall next to the work of Nancy Lunsford and Jay Friedenberg, I realized that we are all dealing with similar themes of chaos and order. Across several different mediums we captured this concept and together our work came together to create a beautiful show. 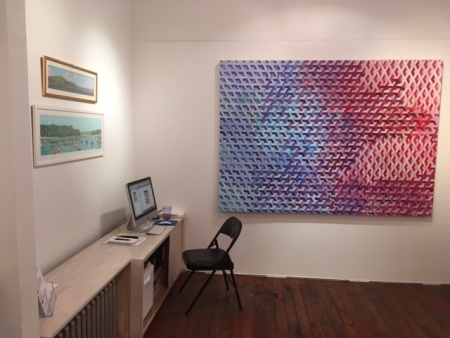 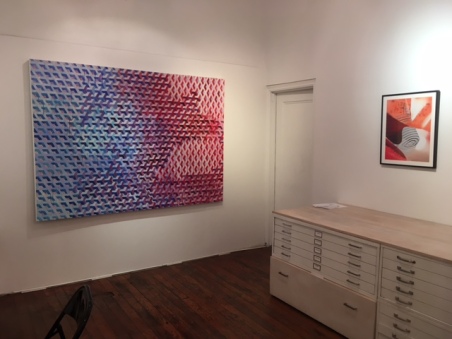 3 comments on “Creating New Work From the Old”

This entry was posted on October 29, 2016 by 440Gallery | Brooklyn in Artist news, From our studios, Uncategorized, What's up @ 440 and tagged art, digital photography.

Previous post
Next post
440 Gallery in Park Slope, Brooklyn, shows and sells fine art created by its 14 members, and hosts twice yearly juried exhibitions. Here we'll share shop talk, answer your FAQs, and give you a peek behind the scenes.