Shop talk, answers to your FAQs, and a peek behind the scenes of an artist-run fine art gallery in Park Slope

Karen Gibbons – Where the Magic Happens – An Artist’s Wings.

The Story Behind the Work:

I Dreamt I Could Fly

When an artist creates work using found objects the success of the piece has to do with a kind of serendipitous magic. In order for me to make a successful sculpture I need to get a few things going. First the “found” things need to be found. Then somehow the found thing needs to meet and marry the images that are fated to be adhered to them. I have to make it all happen, but not too deliberately.  A Facebook Friend recently posted this image: 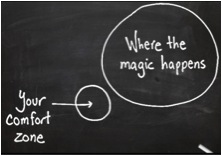 This is so true for me!  As soon as things feel really comfortable and I believe I know just what to do and how to do it I know something is up.  Sure enough, the finished product turns on me: it gets boring and predictable and the art loses its life.

Making art is a tricky process where I must be completely present and at the same time a little uncomfortable and definitely not too serious. I seem to need an inspiring bit of something that has been cast off from somewhere just to begin.  Then I need to challenge myself to create something both unexpected and resonant.  Juggling these elements in ways that remain fresh forces my work to constantly evolve. And so the quest for found stuff, and said stuff’s courtship with images and marks becomes a strange dance.  Objects and images must be found in obscure ways.  It seems one can only find what is not really being looked for.

It happened one day that I was “looking” for some wood to complete a piece.  My husband suggested looking in the catwalk between our building and the next.  This was once a well-traveled route to the elevator in the next building. Yes, two buildings used to share one elevator, but in the last 10 years or so the elevator option has been lost for us. Since then, the closed walkway has become a home for dust and rust. On that auspicious day, we opened it up lusting after nicked-up plywood. There was no lucky plywood, however there were several interesting items.  It seems that when our neighbor left for a permanent move to Switzerland oh, maybe 20 years ago, he left behind an aborted attempt at sculpture.  At least that’s what I’m guessing. In any case, there were two wing-like large forms each over four feet long.  They were pieced together from (probably) parts of an old table.  Each section was carefully cut and joined in an awkward but noticeable curve.  Immediately, I saw them as wings that could be hinged together.

Back in my studio, as I carefully cleaned off 20 years of accumulated dirt, I knew I had a piece in the making.  As for images, I knew immediately that this was to be a piece in my Family Series. In the spirit of staying uncomfortable, asked my find what it wanted.  All it seemed to be saying was “big”.  So I took some photo files to a local print shop and had several printed as large as possible.  Now I was really excited!

Well, whatever I did with those large prints simply would not work out.  I had to discard my original idea and walk away for a time.  When I returned to the project a week later the wings spoke again.  “Big” was still being called for but now I needed to crop my pictures to vary the size of my selections.  Suddenly it all came together. The process of mounting each piece brought further changes but the dance had found its rhythm.  I Dreamt I Could Fly even called out its own title!  A bit of magic happened for me when I keep coming back to that uncomfortable place, this time literally: the dusty rusty catwalk.

A Cup of Air, an exhibition of sculpture and sculptural wall pieces by Karen Gibbons, is on view until April 8.  Find out more at our website…

5 comments on “Karen Gibbons – Where the Magic Happens – An Artist’s Wings.”

Previous post
Next post
440 Gallery in Park Slope, Brooklyn, shows and sells fine art created by its 14 members, and hosts twice yearly juried exhibitions. Here we'll share shop talk, answer your FAQs, and give you a peek behind the scenes.